Why Does My Cat Lick Me? 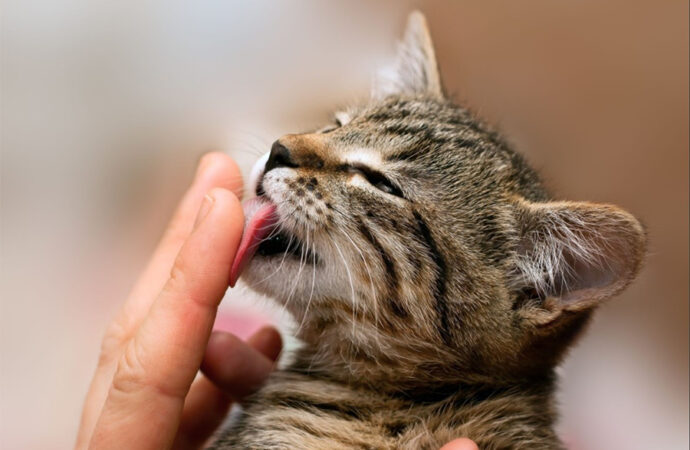 Most of us don’t think too much of our kitty’s licking obsession. It seems like our cats just can’t keep their paws off of us! But rest assured, you’re not alone. Many kitties love to lick their owners, and it’s a genetically ingrained behavior. It could be a sign of affection or maybe a way

Most of us don’t think too much of our kitty’s licking obsession. It seems like our cats just can’t keep their paws off of us! But rest assured, you’re not alone. Many kitties love to lick their owners, and it’s a genetically ingrained behavior. It could be a sign of affection or maybe a way for them to show dominance but regardless, this annoying behavior is one that we tend to grow fond of.

Do you have a cat that can’t seem to stop licking you? Don’t worry, you’re not alone. Many cats love to lick their owners, and scientists aren’t really sure why. Some believe that it’s a way for cats to show their affection, while others think that they may be trying to groom themselves or mark their territory. Regardless of the reason, it’s definitely a strange habit – but one that most of us come to love. So if your kitty is giving you a good lickin’, just go with it! Enjoy those bonding moments and know that your cat is probably just happy to be close to you.

Is It Normal for Cats to Lick You?

Families with cats often wonder if their kitty’s lick means they love them or if it’s just a grooming behavior. The answer, like most things feline, isn’t always simple. While some cultures consider cat licking as a sign of affection, in the western world it tends to be more of an instinctual behavior. And much like how we show our love through kisses, cuddles or hugs, different cats will express their adoration through licking behaviors.

Why Do Cats Lick You?

Cats lick you for a variety of reasons – to groom you, to show affection, and sometimes as a sign of submission.

Cats groom one another as a way of social bonding and also as a way to show dominance or submission. When your cat licks you, it’s essentially marking you as its territory and showing that it’s the dominant one in the relationship. So next time your kitty starts licking you, be sure to give it a pat on the head (or better yet, scratch its chin). It’ll love you for it!

How To Stop a Cat from Licking You?

There are a few ways to stop your cat from licking you. One way is to make yourself less appealing to them. You can do this by spraying yourself with a citrus-scented spray, or by wearing a bitter apple spray. Another way is to distract them from licking you by playing with them or giving them a toy. Finally, you can gently redirect their attention away from licking you by scruffing them (holding them by the skin at the back of their neck) and firmly say “NO.”

Should I let my cat lick me?

There is some debate over whether or not it’s safe to let a cat lick your skin. Some people believe that bacteria and parasites from the cat’s mouth can spread to humans, while others claim that the saliva of cats has beneficial properties (such as boosting the immune system).

At this time, there is no definitive answer on whether or not it’s safe to let a cat lick your skin. If you’re uncomfortable with the idea, you can always try keeping your cat away from your face and body. Alternatively, you could allow your cat to lick you but make sure to wash your skin afterwards.

Why do cats lick their owners?

Cats use their tongues for a number of reasons, including grooming and to show affection. They want to build trust with their owners and other animals, as well as be social. So the next time your cat licks you, remember that he or she is more likely to be showing love and affection than trying to make a meal out of you.

Why does my cat sleep next to me?

Cats will sleep with their humans regularly, and they do so with little to no reason. In some cases, it might be easier to simply let them into your bed instead of fighting it. A warm body is a nice addition to the cold nights that are coming soon, and your cat will love having you or another family member close by.